Throughout the last two centuries (more than 200 years), the church that is now Asbury First United Methodist Church (AFUMC) has survived turmoil, debt, and disaster to become the community of believers it is today.

In 1821 the Erie Canal came to Rochester, boosting the population. The church was not large enough to support a growing congregation, so a lot was purchased in 1830, and a new church completed in 1831. Around 1834, a great religious revival was taking place, boosting attendance to 2,000 people.

On January 5, 1835 the church burned down, and the congregation returned to their 1824 chapel.

In 1836, the East Society of the Methodist Episcopal Church in Rochester was incorporated, creating two distinct charges on either side of the Genesee River. 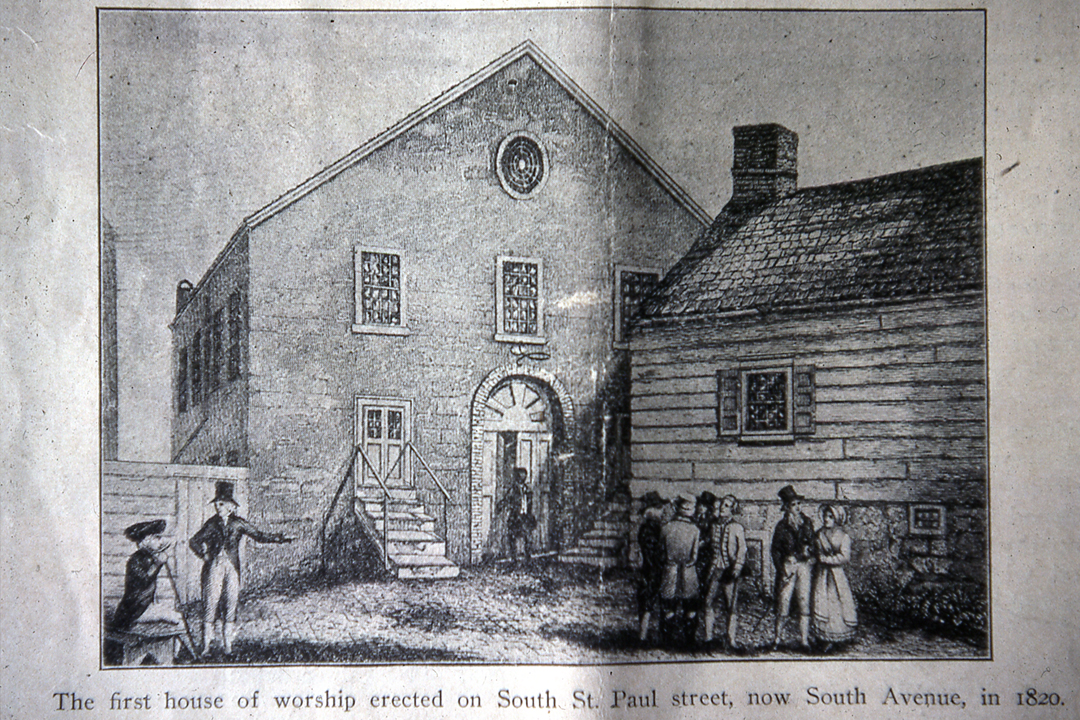 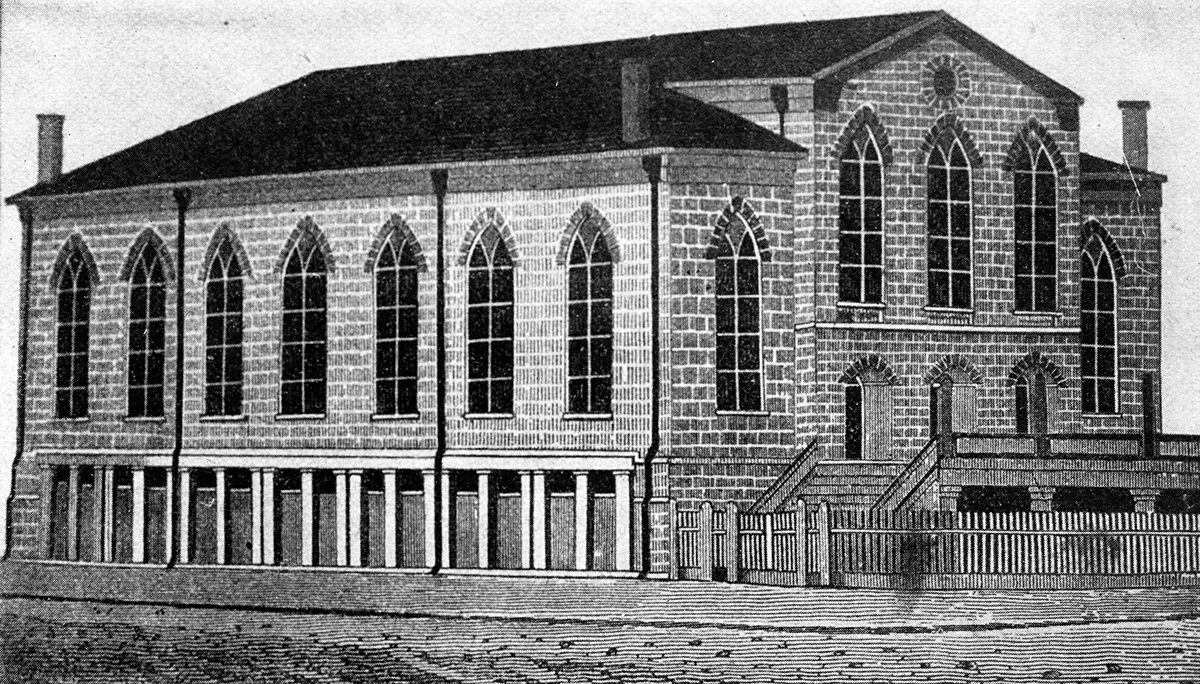 In 1837 new construction was initiated, with a building finished in 1839. Debt from building the new church found them owing $10,000 by 1841. In 1850, Third Methodist Church was incorporated because of quarrels between the conference, the Sunday school, the congregation, and the trustees. The building that the First Church occupied was sold in 1854.

On the other side of the river, during a revival in 1842, the membership of the East Society rose from 300 to 591. Land was purchased and construction lasted to 1844. The new church was named St. John's, though it was still legally called the East Society.

But as they owed over $10,000 on the building, the court in 1856 declared the mortgage foreclosed and the building and land be sold to cover the debt. In 1859 the church was auctioned off, purchased for $6,000 by a member, Hiram Davis, after selling his home farm.

Meanwhile, First M.E. again faced the need for a new building and began construction in 1855. Construction was completed in 1861, when they began a 41-year tenure in this building. 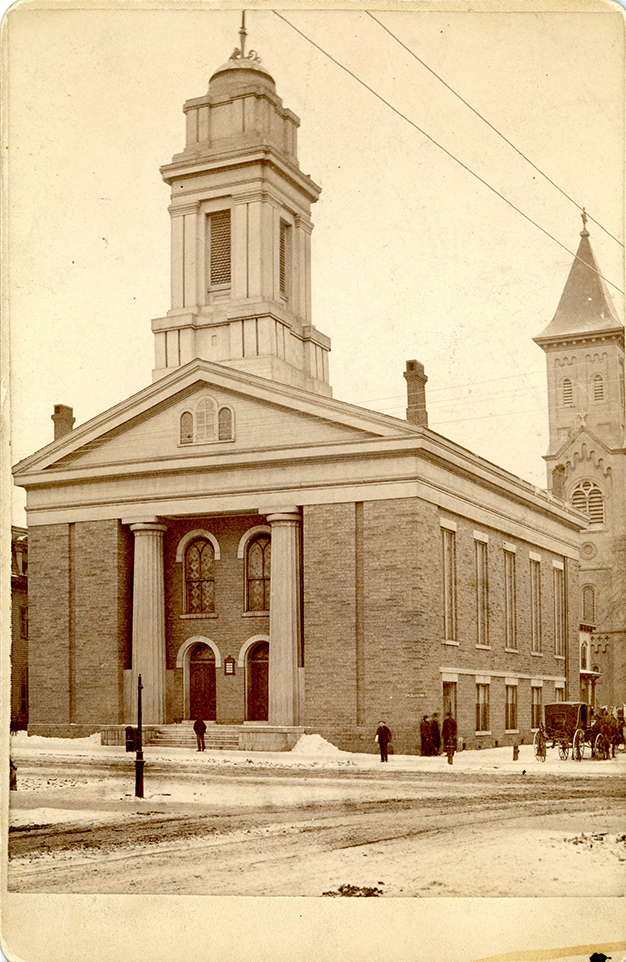 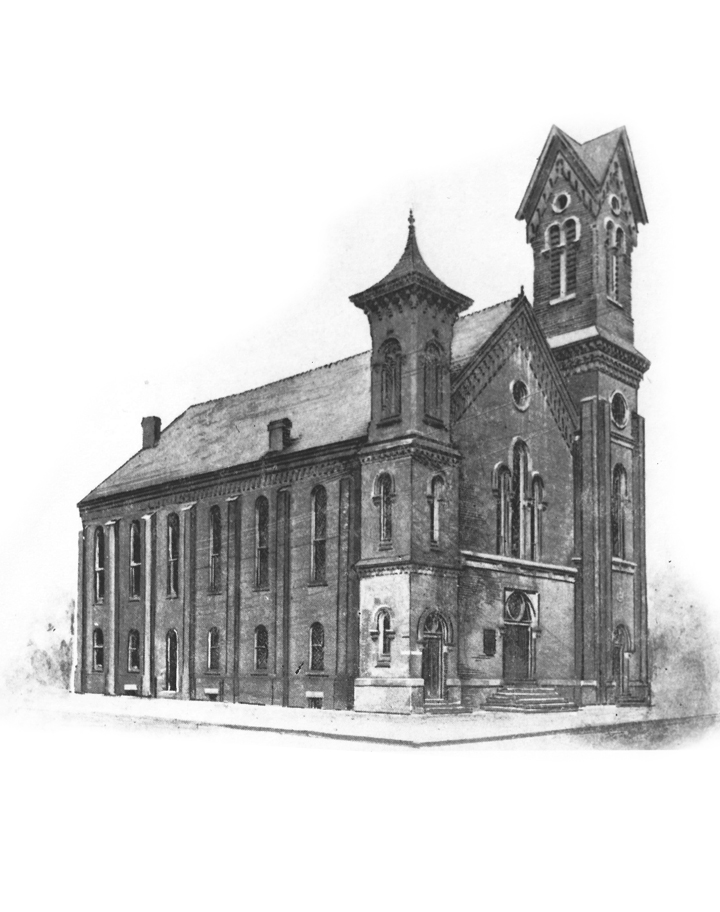 In 1860, the "Asbury Society of the Methodist Episcopal Church of Rochester" was incorporated to replace the East Society after a meeting of the church leaders. A committee was created to work with Hiram Davis to purchase the old building. He told them he would sell it for $5,500.

From 1861-1884, the other congregations had a time of slow growth. There was particular excitement over the purchase at Asbury of an organ (costing $8,000) ending an era when instrumental music was frowned upon by the Methodist church. In 1870 First also bought an organ.

In 1885, the Asbury church location became more industrial and was no longer suitable for a church. Hiram Davis, who was on the board of East Side Savings bank, suggested that the bank buy the property for $50,000. The deal was made, giving Asbury $50,000 to buy/build a new church. A location was found, replacing the Second Baptist Church, and a new church (wired with electricity) was ready for dedication in 1885.

At First M.E. the congregation was not happy with their old chapel, and a new one was begun in 1896 and finished in less than a year. The minister at First during this time was Charles Hamilton, a very successful fundraiser. 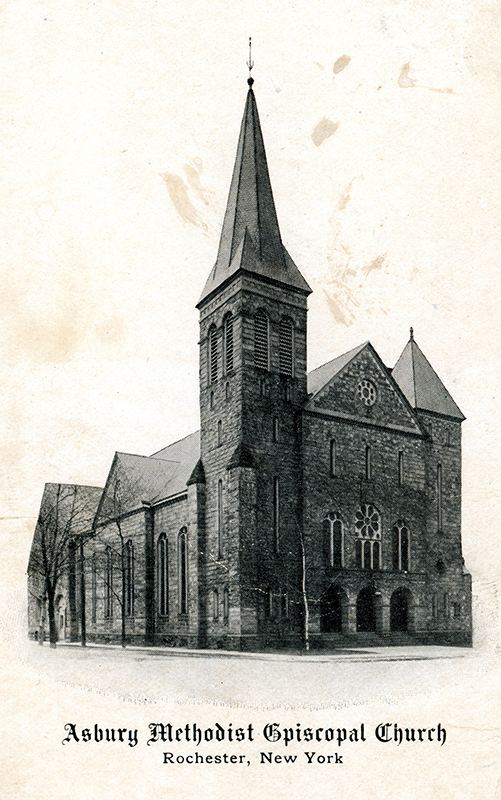 In 1933, however, First M.E. church caught fire. Thirty firemen were injured in the disaster. The congregation persevered, using other church's facilities.

At this point, Asbury reached out to them, and in 1933 during the quarterly conference, the decision was made to merge. They decided on the name "Asbury-First M.E. Church of Rochester." A great day of celebration at the union was held on January 14, 1934. More than 90 percent of the members from First transferred their membership to Asbury-First and the membership soared to more than 2,000. But with the growing congregation, a new church was again needed. 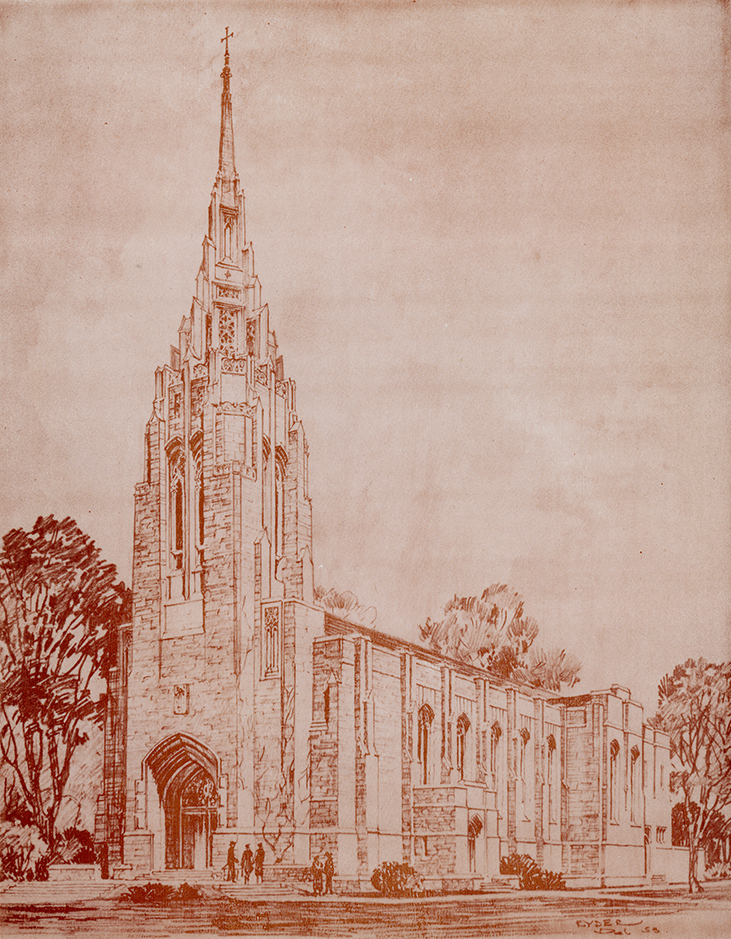 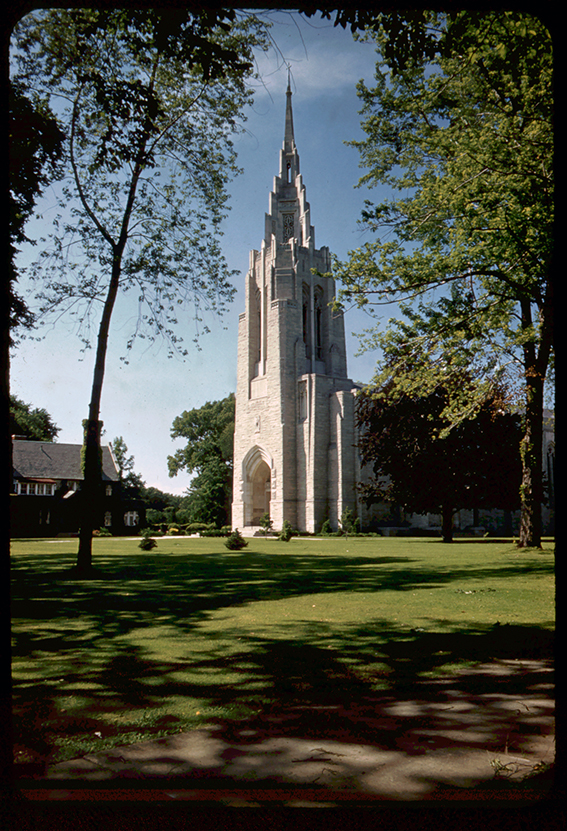 Under the leadership of Dr. Weldon F. Crossland, who served Asbury First for 27 years until his retirement in 1959, it was decided to build a new church. Plans were started in 1941. A site on East Avenue was found and purchased in 1943 (and was added to by the purchase of 1050 East Ave. in 1950). WWII intervened and halted plans, but they were revamped ten years later in 1953, and groundbreaking for the Sanctuary was held in that year in February. It took 27 months to complete, and has been home to the people of Asbury First ever since. In 1961, an education wing was added to the east side of the Sanctuary, and in 2007, a gathering space and welcome hall was built in the space between the two, formerly occupied by a cloister. 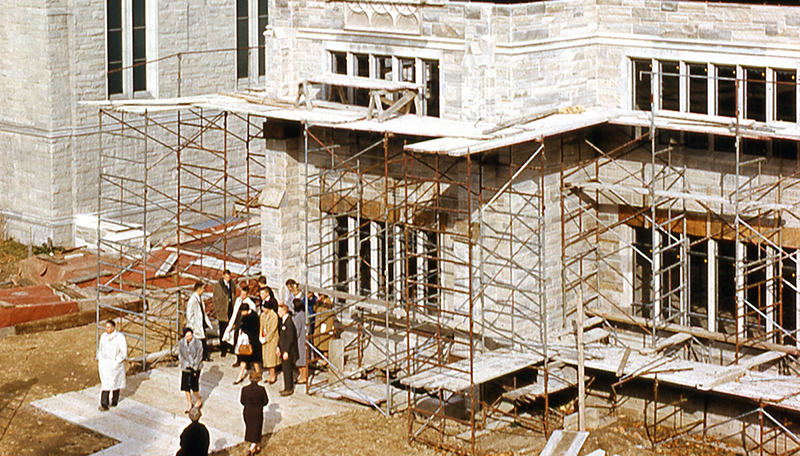 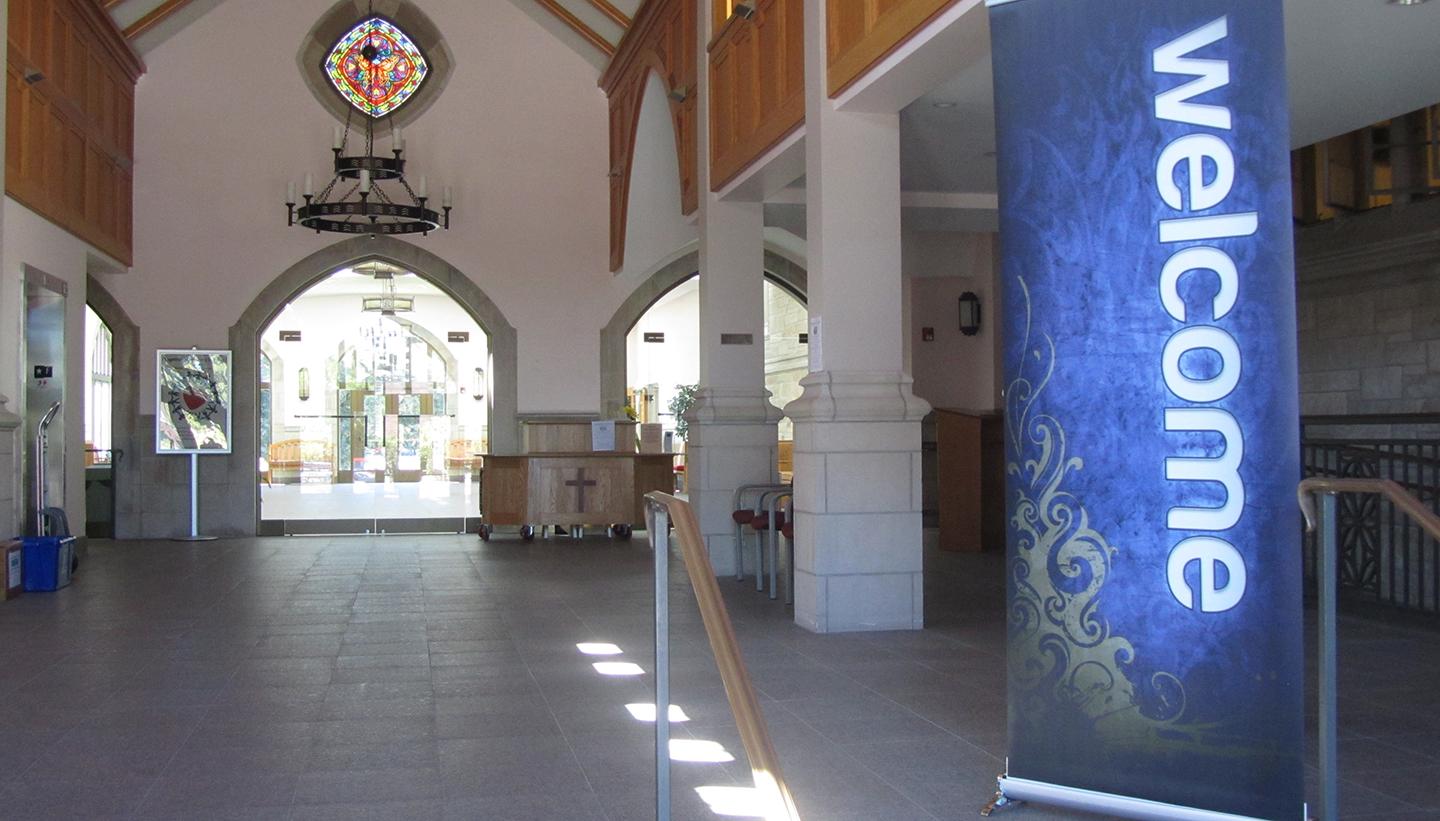 Continuing as good stewards for the future, our next venture is to convert 1010 East Avenue into an Outreach Center that will house our Dining & Caring Center, Storehouse, and UR Well Clinic. Click here to learn more about our future plans, or watch the video below.